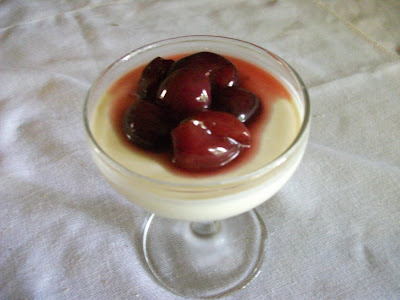 One of the things I love about summer is cherry season.    I get downright giddy when the Rainier variety start showing up in supermarkets!  Here's what I made with part of my cherry stash (managed to pick up a couple of pounds on sale).   It had been a while since I'd made panna cotta for dessert, so I decided to try this easy recipe from Food & Wine's website.   I love the creamy consistency, plus you don't have to fuss around with unmolding them.    My grandmother (who'd never even heard of panna cotta, much less tried the dessert) gave them her stamp of approval, so that's good enough for me!   I made a simple amaretto-flavored cherry compote to spoon over the panna cotta.  Recipes to follow next...
Amaretto Cherry Compote
1 cup cherry juice
1 tsp lemon juice
½ cup sugar
1 tbsp of amaretto liqueur (or 1/2 tsp of almond extract)
1 ½ pounds fresh cherries, pitted & halved (or 20 ounces of frozen cherries)
2 tsp corn starch
In a heavy saucepan, bring cherry juice to a simmer.  Add cherries, sugar and lemon juice and simmer until cherries soften.  Make a "slurry" by blending the corn starch with the amaretto liqueur.  Slowly stir the amaretto/corn starch mixture into the cherry mixture.  Cook over medium heat until mixture boils and thickens.  Allow mixture to cool a bit before transferring to a container.  Cover and chill in the refridgerator until cold. 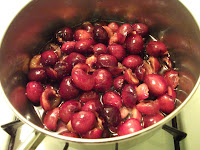 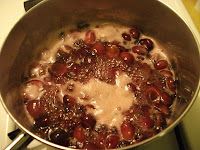 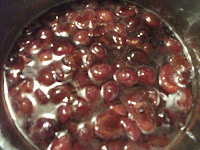 And now for the panna cotta...

Vanilla Bean Panna Cotta (serves four)
(a scaled down version of this recipe by E. Michael Reidt at Food & Wine.com)
1 pint heavy whipping cream
¼ cup sugar
½ of a vanilla bean, split lengthwise, seeds scraped (if you don't have a vanilla bean, you can substitute 2 tsp pure vanilla extract)
1 tsp unflavored gelatin
2 tbsp water
In a medium saucepan, combine cream, sugar, vanilla bean and seeds.  Bring mixture just to a simmer.  Remove from heat, cover and allow cream to steep for about 15 minutes.
While the vanilla cream mixture steeps, sprinkle one teaspoon of unflavored gelatin over a small bowl containing two tablespoons of water.  Let stand until evenly moistened (five minutes).
Uncover the vanilla cream mixture and bring back to a simmer over medium heat.  Remove from heat, add geletin and stir until dissolved.  Remove vanilla bean and pour cream mixture into 4 four ounce ramekins and allow to cool to room temperature.  Cover with plastic wrap and refridgerate for about three hours until the panna cotta is set.  No need to unmold-just spoon a bit of the cherry compote over the panna cotta before serving. 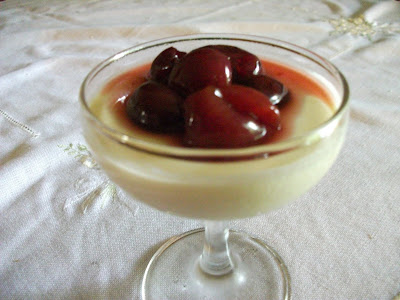 Posted by hopeless foodie at 4:37 PM