After a long, stressful week of working and moving into a new apartment, I decided to give myself a bit of a treat last weekend.  I had been craving a big, thick Porterhouse (my favorite) but ended up settling on a nicely marbled NY strip instead.  Nothing fancy with the prep:  a little extra virgin olive oil, seasoned salt, black pepper.  I believe in keeping it simple.  Got the new cast iron skillet blazing hot and cooked the strip for about two minutes on both sides to create a nice char.  Topped the strip with a pat of butter and finished it off under the broiler for about three to four minutes for medium-rare. 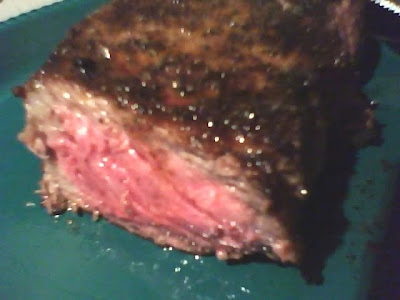 The result was pretty good, even with an electric stovetop (delicious too). Apologies for the crappy pic! Posted by hopeless foodie at 3:09 PM

Email ThisBlogThis!Share to TwitterShare to FacebookShare to Pinterest
Labels: recipes